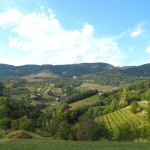 The word Slovak derives from an old term for Slav: Slovan. Today’s Slovak Republic  corresponds to the centuries-old region of Slovakia (or Slovensko, as it’s referred to locally). Slovaks share a common culture despite regional (eastern, central, and western) and local differences in dialect, customs, and religion. The Slovak territories were historically cut off from economic development by the Carpathian mountain range and by the political border between Austria and Hungary. This made it tough for the Slovak people because they were tied to the Czech lands by language and culture but were bound politically to the Hungarian government. Policies aimed at imposing or maintaining the dominance of Hungarian language and culture— commonly referred to as Magyarization—were established.

You can find out more about which cookies we are using or switch them off in settings.

This website uses cookies so that we can provide you with the best user experience possible. Cookie information is stored in your browser and performs functions such as recognising you when you return to our website and helping our team to understand which sections of the website you find most interesting and useful.

Strictly Necessary Cookie should be enabled at all times so that we can save your preferences for cookie settings.

If you disable this cookie, we will not be able to save your preferences. This means that every time you visit this website you will need to enable or disable cookies again.